Today, we took off from a nearby gas station and headed to begin the infamous Pritchett Canyon trail. 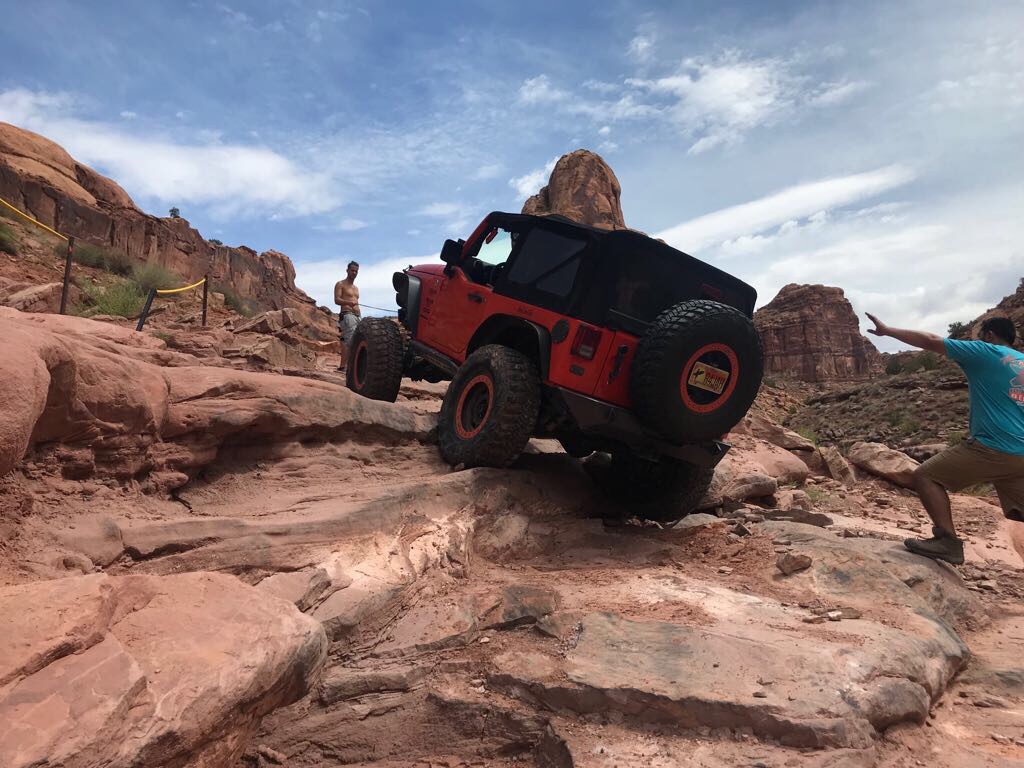 Pritchett Canyon was named a BFG Outstanding Trail in 2008, but it requires expert driving skills and a capable build to complete the trail. Pulling into a trailhead where we had to open a wire fence to enter, we had no idea what we were getting ourselves into. Pritchett Canyon is one of the three hardest trails in all of Moab. The other two are called Rusty Nail and Area BFE. Rental Jeeps are not even allowed on these three trails, but we all brought our own builds so here we go. Pritchett Canyon is EXTREMELY difficult. This trail pushed me to my limits as a driver, and pushed my Jeep to it’s fullest capabilities. But Boy, do I feel accomplished after completing it. It’s a trail like this one that I can see EXACTLY the purpose of EVERY single aftermarket part on my Jeep, and it feels incredible. I used my lockers more than I ever have before, used my winch more than I ever have, and even had to use the best driving and throttle modulation skills I could muster up. Since we are in a big group of four door Jeep’s, one LJ, and two 2 door Jeep’s, we could evidently see the strengths and weaknesses of each wheelbase on this trail. The LJ performed amazingly on this trail, with good spotting and driver skills as well of course. The two door Jeep’s also did really well (mine included), but the four doors had more difficulty avoiding body damage and climbing steep ledges due to the longer wheelbase and added weight. I learned a lot on this trail, and it’s been the most worthwhile off-roading I have ever done. With only four miles of trail, Pritchett Canyon still took us 12 hours to complete. We were a very large group (12 Jeeps) so it’s understandable that it took so long, but it was exhausting. The first two miles of the trail are pretty uneventful, until you get to Chewy Hill. These first two miles are a bit misleading, since they can be done pretty quickly. The next two miles of Pritchett Canyon, however, consist of major obstacle after obstacle. There was not a moment to rest as we had to work as a team to get everyone spotted through the trail. 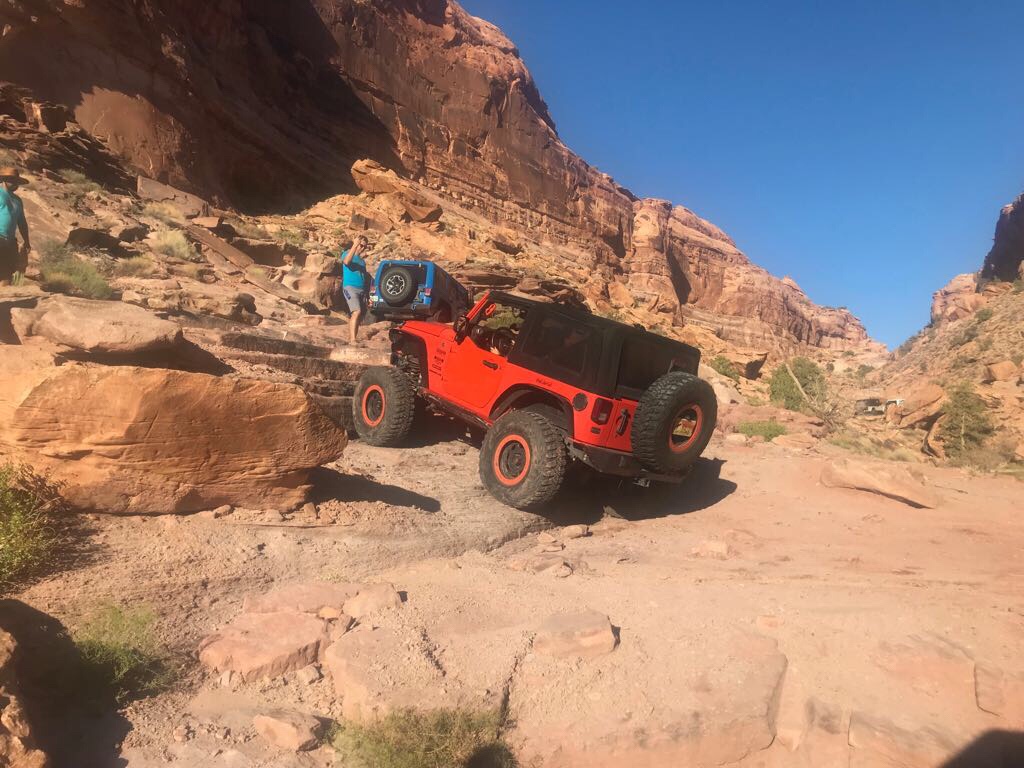 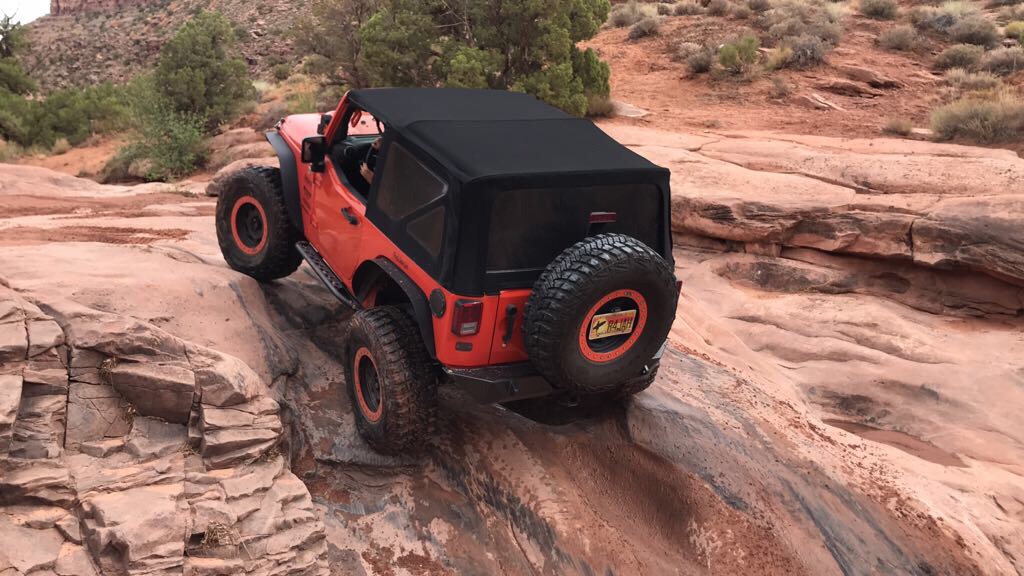 Towards the end of the day, our sunlight was running out so we decided to start winching everyone up obstacles automatically, or at least connect a winch as a safety line.This trail was mentally, physically, and emotionally exhausting. Although my Jeep needed the help of a winch at most of the major obstacles, I was able to really learn the intricacies and technicalities of off-roading within this trail. I learned the weaknesses of my build during this trail, and it has motivated me to take it to the next level. 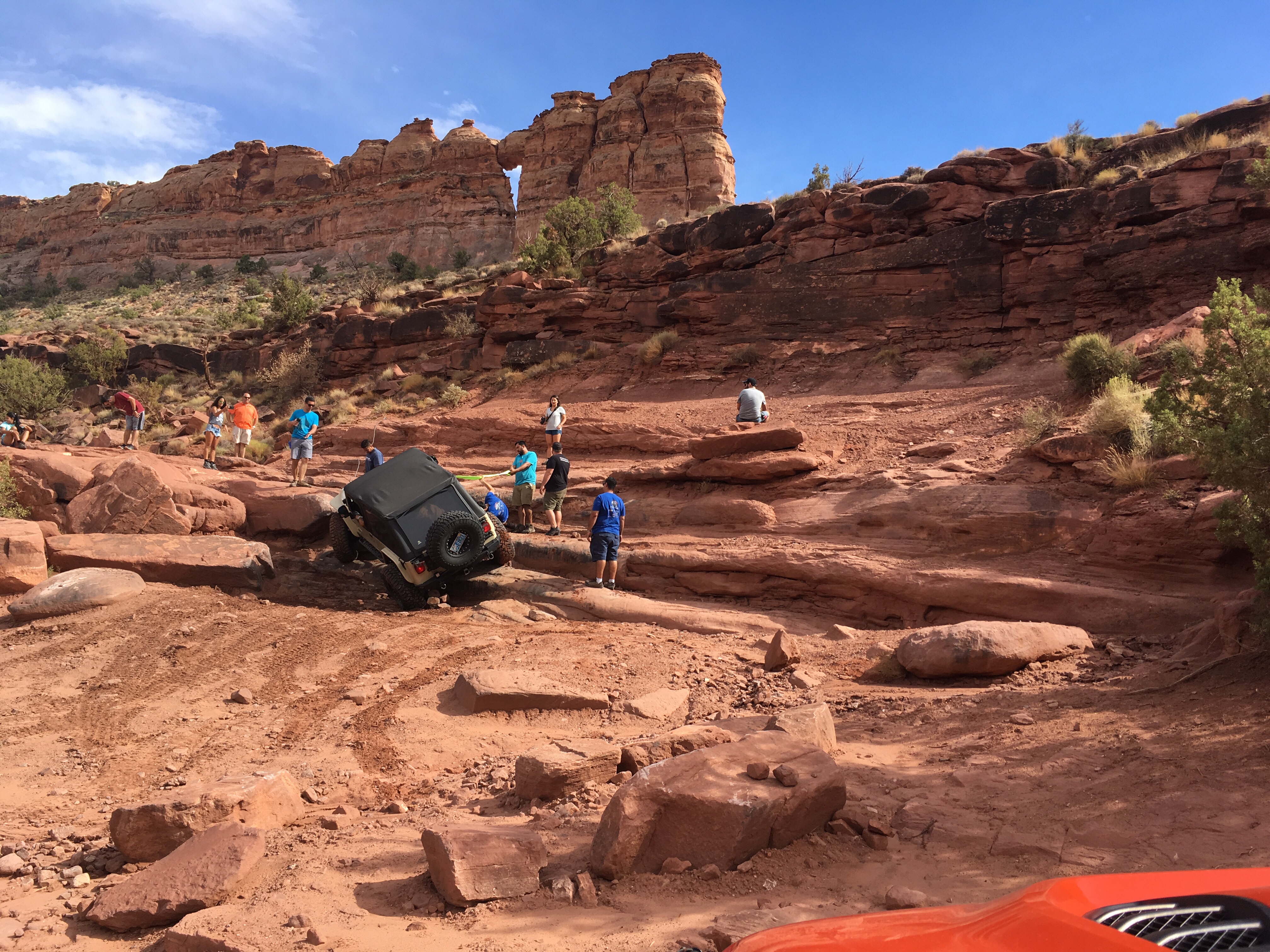 Pritchett Canyon has been my favorite trail since it has challenged me so much as a driver. It has also been the most beautiful trail in Moab. Most Moab trails are high atop rocks and mountains, but Pritchett is down below inside a canyon that is full of desert foliage. Our last minutes of sunlight faded as we were all making our way up the last obstacle, Yellow Hill. Then, there is a long 16-mile drive offroad until you reach a highway to get back into Moab. We didn’t get back into town until 11PM. It was the longest day of off-roading ever 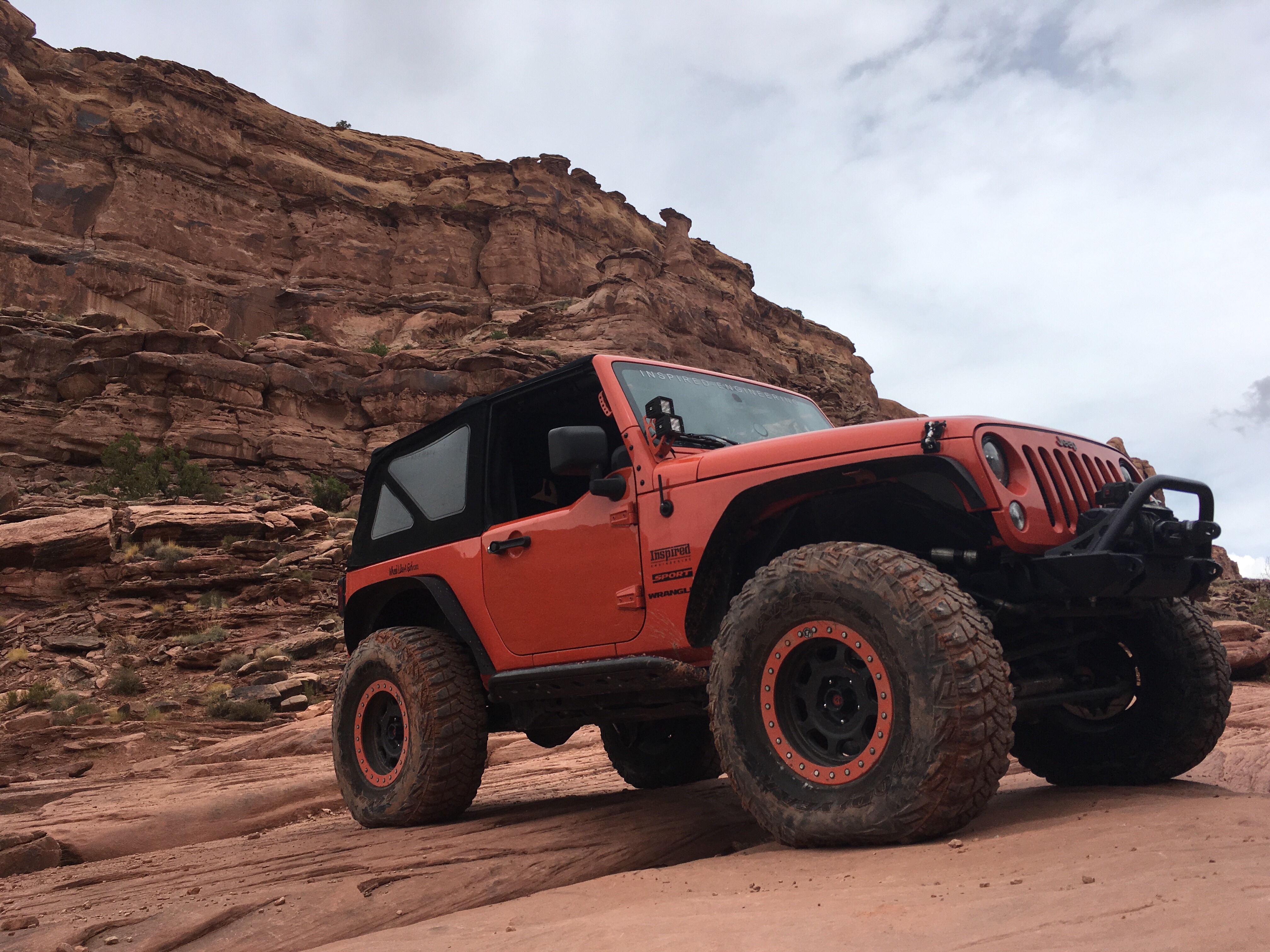 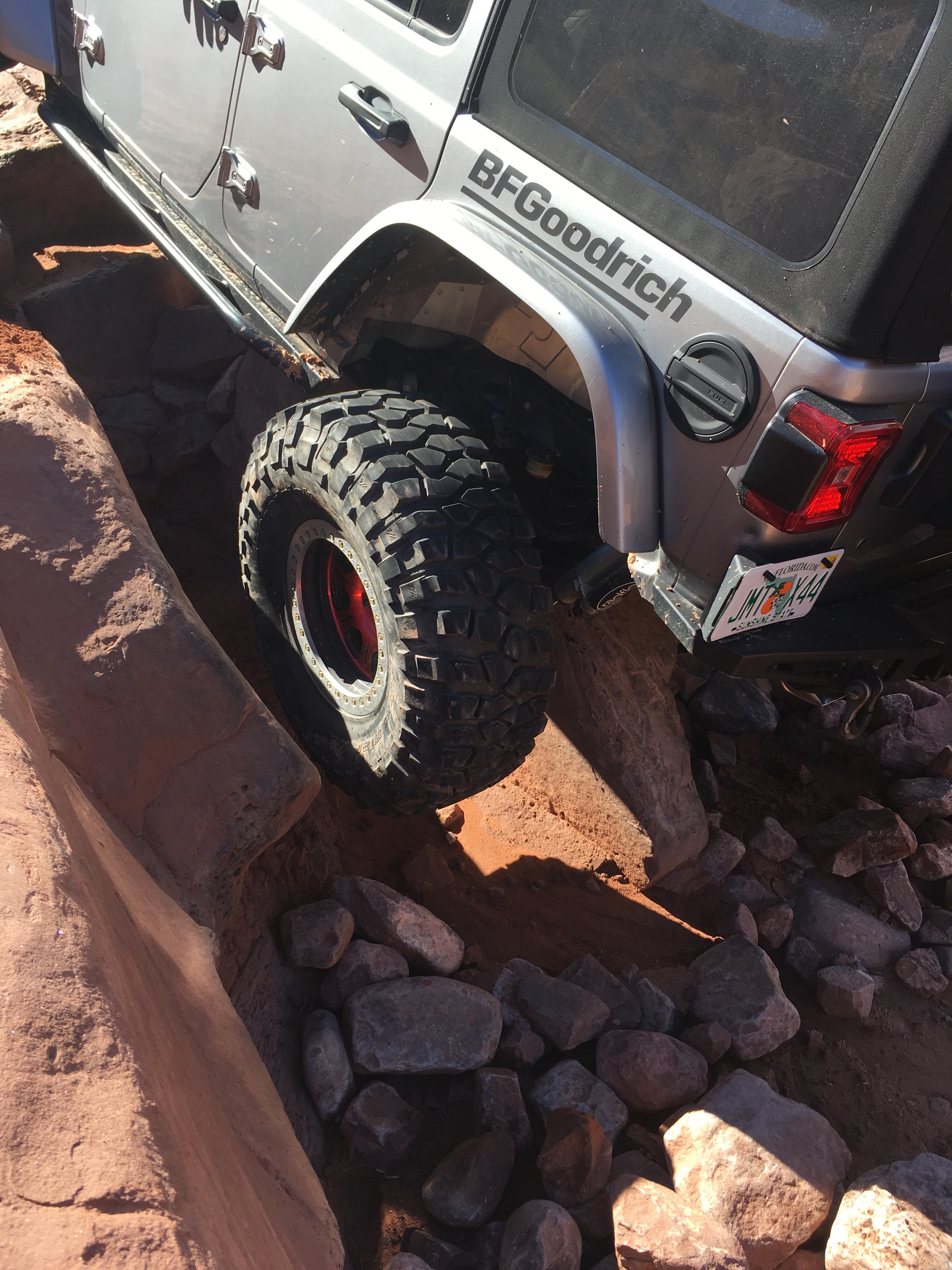 If you plan on visiting Moab and running this trail, please make sure you come prepared. Note that my build still needed to winch slightly up many obstacles. Also, be sure to invest in the Guide to Moab, UT Backroads and 4WD Trails. It has mile markers of obstacles within the trails, pictures, bypass information, and more that will really aid you in navigating Moab.